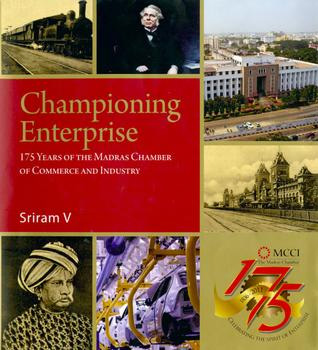 History has seen many a great institution simply go into oblivion. But this one has stood the test of time. It has seen 175 summers. That it is still surviving is in itself a big achievement. What is significant, however, is that it stays relevant even in modern India. The Madras Chamber of Commerce and Industry (MCCI) has indeed come a long way since 18 wise men met at the office of Binny & Co in Armenian Street (in Madras, now Chennai) to establish it way back in September, 1836 within a week after the birth of a similar chamber in Bombay. In the process, the Madras Chamber has also undergone a major metamorphosis. A sense of history is very important for Internet age youngsters to appreciate the pains of the past and place the future in perspective. The coffee-table book on the Chamber is indeed a revelation. Not just for the way it is packaged but also for the wealth of information it contains. Even a quick flip through the pages will fetch you an insight into something or the other of the past. Multi-faceted V. Sriram and his highly resourceful team have nicely reconstructed the road to the past when the Madras Chamber was very British in the beginning.

Fascinating stories
The book is a journalist's delight, especially if you are a financial writer. Even as it gives an insightful peep into the birth of the Chamber, the book brings out the fascinating stories of its interminable links with the commercial interest of the British political bosses. Author Sriram, however, has deftly sketched out the delicate balancing done by the Chamber in securing the national interest.

Interestingly, the book reveals how the then Governor of Madras, Sir Frederick Adam, was instrumental in the Chamber accommodating some Indian names among its British members. This saw native merchants like G. Sidloo Chetty, C. Tiroocawmi Nayak and V. Seth get into the Chamber.

One of the early causes that the Chamber campaigned for was the removal of ‘transit duties' (tax levied for movement of goods from one place to another). While the Central Government in Calcutta abolished ‘transit duties' in Bombay Presidency, it declined to do so in Madras. Successive presidents of the Chamber — John William Dare of Parry, William Scott Binny, John Line, James Scott and John Utley Ellis — had all lobbied unsuccessfully with the Central Government for the removal of transit levies in Madras Presidency. The Chamber had also to fight the Central Government in Calcutta on the issue of rupee exchange rate which was fixed differently for the Madras Presidency.
As it assiduously worked to change the attitude of rulers in Calcutta, it had realised that commerce could flourish only if infrastructure improved. The book has brought out in greater detail the proactive initiatives of the Chamber in fixing the core issues throttling trade and commerce in this part of the country. The Chamber battled hard to push for the construction of the Madras harbour. That the Chamber always worked in tandem with others was evident when it promised its support to the newly-born Madras Trade Association, formed by the retailers and traders in 1856.

Since its inception, the Chamber has been a staunch protagonist of free trade. With the dismantling of East India Company, the rule of the crown was ushered in. The Chamber hit the headlines when it opposed a move by Lord Canning to hike customs duties. It went on to demand the appointment of “a gentleman of known financial ability'' to pull the deficit-hit Government out of crisis. The nuggets (the box stories with rare pictures) give one a pleasurable reading experience. Each one has a story to tell. Do you know where the first organised labour union was born? No prize for guessing. It was in Madras way back in 1918, thanks to Annie Besant, B.P. Wadia and Selvapathy Chettiar. The Home Rule Movement launched by Annie Besant in 1917 indeed had caught the Chamber on the wrong foot. A strike at Binny's Carnatic Mill in 1889 led to weekly holiday becoming a statutory right!

The book also traces the birth of Employers' Federation of South India (EFSI), which became a mouthpiece of the Chamber on labour issues. The formation of Reserve Bank of India, the development of T. Nagar and the establishment of ASSOCHAM — you name it, the Chamber had played a decisive role in all of them. These little stories within the big story make for an interesting reading. A critical mind which cares for detail alone could weave a not-so-esoteric Chamber history into a gripping story.